Get Windows 11 Features in Windows 10 with SmartWindows 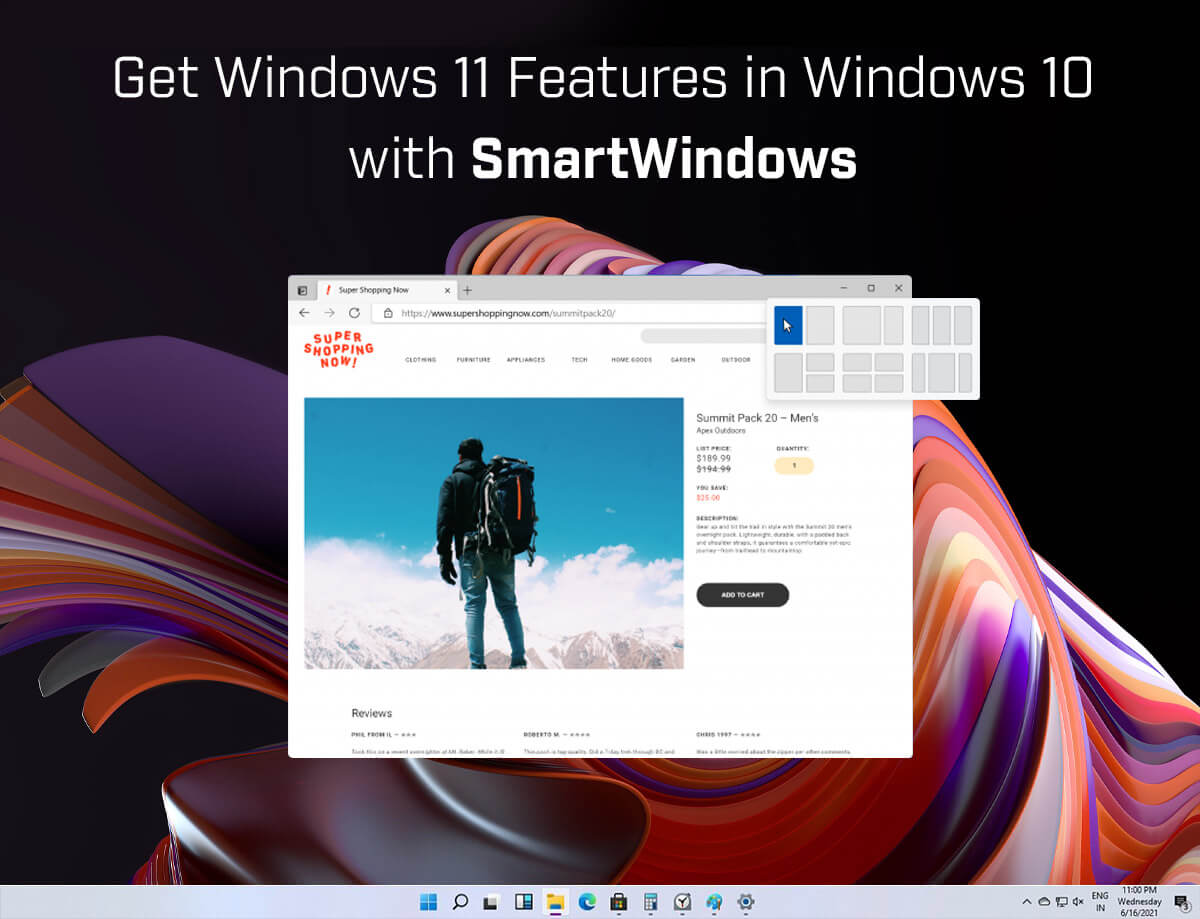 Microsoft has launched Windows 11 beta version on 24 June 2021. The beta version of Windows 11 comes with plenty of features and improvements. Courtesy of the leaks of the upcoming OS, Windows 11 has a fresh start menu, redesigned taskbar, Snap Layouts, Desktops, and an overall improved UI. However, it still appears to use many other components from Windows 10. Microsoft has been working on Windows Desktop10X that was intended primarily for dual screens. However, that idea has been shelved and Microsoft is now going ahead with Windows 11.

With the new snap features, PC users would be able to position their apps on multiple displays quite easily. Users can position their mouse on the maximize button or right-click on it to see the different split options available and choose the one to their liking. Snap Layouts and Desktops are designed to help users better organize their windows and desktop layouts to keep things aesthetically clean. Creating separate desktops for work, home, or projects would be possible via the new desktop feature. It will become easy for the user to manage the clutter on the screen.

After six years, Microsoft’s first major operating system update is going to release. As announced, Windows 11 release date is October 5, 2021. It would be a major software update that would be available for all compatible PCs later this year.

The Windows users are now excited about the Windows 11 app positioning feature on multiple displays. This latest release of Windows allows you to increase productivity at work by accessing the desktop apps from a unified interface. It looks like Microsoft has taken a leaf out of our book to bring separate desktops in Windows 11. SmartWindows serves the same purpose and makes your Windows 10 smarter enough with the same features. So why wait for Windows 11 when you can do much more with SmartWindows in Windows 10?

So why switch to Windows 11 when you are getting ten times more features in SmartWindows?

The following are some features that Windows 11 is introducing or improving.

What are the Useful Features of Windows 11?

Based on the leaked features of Windows 11, there are major updates to how users will interact with and within Windows. The “Snap Controls” and “Desktops” are useful features that allow PC users to arrange the windows of multiple apps on the screen. They give the users access to multiple displays that contribute to increased productivity at work. This multitasking feature gives a 360-degree view of desktop applications and eliminates the excessive clicks to switch between multiple applications.

Get Enhanced Features with SmartWindows

SmartWindows brings “app positioning feature on multiple displays” with much more enhanced capabilities. It is an all-in-one package to make your Windows 10 smarter. Configure your applications and windows to the right places and size and create a profile in SmartWindows.  It remembers the window size and position of apps on Windows 10. It can restore all the display arrangements with just one click. The last saved files in Microsoft Office are reopened and all the tabs and respective URLs of multiple browsers without any manual effort. Similar to Desktops features, profiles can be used to depict different needs such as work, home, or projects. No version of Microsoft Windows gives you this number of features.

Some Other Features of SmartWindows Include:

SmartWindows gives you more hands at work and eliminates excessive switches between applications. By creating profiles of applications, it allows you to keep entertainment and work separately. Whether it is about the ‘Snap Controls’ feature or ‘multitasking’, SmartWindows is feature-rich productivity software that allows you to work smart and not hard.

So why switch to Windows 11 when you are getting ten times more features in SmartWindows?

Do you write, play games, code, illustrate or edit images on your computer? Wouldn’t it be great if you could configure your windows in just the right places.

How to Keep Windows in Focus

Do unnecessary notifications and pop-ups annoy you? Most of the time we feel
June 27, 2022 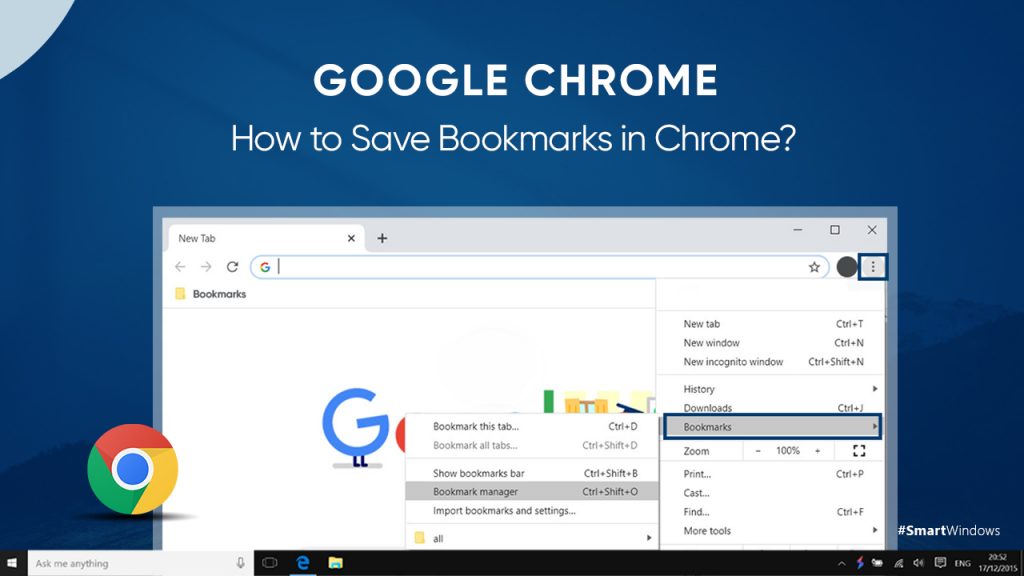 Google Chrome – How to Save Bookmarks in Chrome?

Have you ever found a webpage/website that you want to read later? While
May 27, 2022

Signup for our newsletter

Want to keep up to date with all our latest updates and news?

Sign Up
Your subscription could not be saved. Please try again.
Thank you for subscribing to our newsletter. You will hear from us soon!
We use cookies on our website to provide you with a better experience, improve performance, personalize ads, and analyze our traffic. We may share your information with our analytics, social media, and advertising partners to provide tailored adverts. By using our website, you agree to the use of cookies. Privacy Policy
Cookie settingsACCEPT
Manage consent

This website uses cookies to improve your experience while you navigate through the website. Out of these, the cookies that are categorized as necessary are stored on your browser as they are essential for the working of basic functionalities of the website. We also use third-party cookies that help us analyze and understand how you use this website. These cookies will be stored in your browser only with your consent. You also have the option to opt-out of these cookies. But opting out of some of these cookies may affect your browsing experience.
Necessary Always Enabled
Necessary cookies are absolutely essential for the website to function properly. This category only includes cookies that ensures basic functionalities and security features of the website. These cookies do not store any personal information.
Non-necessary
Any cookies that may not be particularly necessary for the website to function and is used specifically to collect user personal data via analytics, ads, other embedded contents are termed as non-necessary cookies. It is mandatory to procure user consent prior to running these cookies on your website.
SAVE & ACCEPT 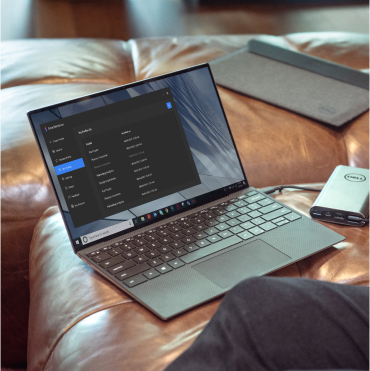 Buy SmartWindows TODAY and get

No Thanks! I prefer to pay full price
Go to mobile version